Melanin gives the skin its tanned look, while the amount of melanin increases when you expose your skin to the sun. In addition to tanning the skin, melanin also protects the skin from the sun's harmful UV rays! Simplified; the more melanin that is in the skin, the browner we become and we also get a higher protection against UV rays; UV rays that can cause skin cancer and that make our collagen break down.

SUNNY SKIN™ boosts the level of melanin, which will improve your ability to tan, and at the same time protect the skin from the harmful UV-rays.

When the skin is exposed to the sun, melanin production increases, which is what produces a tan. It's the body's natural defense mechanism against sunburn. In other word; melanin absorbs harmful UV (ultraviolet) rays and protects your cells from sun damage.

When you spend time out in the sun, your body produces more melanin. The substance absorbs light from UV rays and redistributes it toward the upper layers of skin. It also protects the genetic material stored in your cells by keeping out harmful UV rays.

But keep in mind that melanin alone isn’t enough to protect your skin from sun damage. That’s why it’s so important to wear sunscreen and appropriate clothing whenever you’re outside.

Melanin also provides pigmentation to your eyes and hair!

MELANIN - THE PIGMENT FOR A NICE TAN

WHY DOES THE SKIN GET TANNED?

Tanning is actually a pigment change in the skin when exposed to ultraviolet radiation (UV). When the skin gets sunburned, the skin forms pigment (melanin) which absorbs more of the UV radiation and protects the skin. It is this pigment - melanin - that makes the skin brown!

When you are in the sun, the skin tries to protect itself from the UV rays. Even if it is cloudy outside, the UV rays pass through the clouds and reach your skin.

It is important to protect your skin from sun damage caused by UV radiation. Natural components in the skin, such as melanin, can help the skin protect itself from the inside out!

Melanin is a pigment in the skin that protects you from the sun's dangerous rays. Melanin can absorb the sun's harmful rays and thus protect the skin. People with dark skin naturally have a higher amount of melanin in the skin, than those with lighter skin. Melanin production in the skin can increase over time, giving you better protection against the harmful UV rays.

In the epidermis, there are three types of cells. The most common cells are keratinocytes (90%). Keratinocytes produce keratin. These cells take up melanin from melanocytes, which are located in the lower layer of the epidermis. (Interposed between the keratinocytes are Langerhans cells that are part of the adaptive immune system).

More specifically, it can be said that skin pigmentation reflects an interaction between two cell types within an epidermal-melanin unit. Melanocytes in the basal layers of the epidermis synthesize melanin pigments in specialized membrane-bound compartments called melanosomes. The melanins in the melanosomes polymerize on an amyloid matrix to form a melanin nucleus. Subsequently, melanin pigments are transferred from melanocyte dendrites to closely approximated keratinocytes in the basal epidermal layer. Keratinocytes store melanin in membrane-bound compartments and place them in a "helmet" that surrounds the nucleus to protect their DNA from UV radiation (1).

The melanins give the skin its tanned look, while the amount of melanin (1) increases when you expose your skin to the sun. In addition to tanning the skin, melanin also protects the skin from the sun's harmful UV rays! Simplified; the more melanin that is in the skin, the browner we become and we also get a higher protection against UV rays; UV rays that can cause skin cancer and that make our collagen break down.

melanin is a polymer that is made up of a chain of molecular parts, monomers. Melanocytes mainly produce two types of pigments: pheomelanin (red) and eumelanin (dark brown)

Melanin is found not only in the skin, but also in the hair, in the retina, in the kidney marrow and in the adrenal zona reticularis, in the inner ear, and in some places in the brain.

When the skin is exposed to the sun's UVB radiation, it gradually forms a pigment - melanin - which protects against mainly UVB radiation, and makes the skin tanned. This production of melanin is called melanogenesis. The increased production of melanin is a reaction to the DNA damage of UV radiation. Melanogenesis leads to delayed tanning, which typically becomes visible two or three days after exposure.

UVA radiation does not cause sunburn, but reaches deeper into the skin and can break down the connective tissue protein collagen, which, among other things, accelerates the skin's aging, and makes the skin wrinkled and inelastic. If you have read our previous articles on collagen, you will understand how important it is to protect this protein - for both your health and beauty! The UVA radiation makes the melanin formed from the UVB radiation darker. The UVA radiation can also release melanin from the melanocytes, but does not increase the amount of melanin in the body, as the UVB radiation does.

The tan created by increased melanogenesis typically lasts a few weeks or months, much longer than the tan created by oxidation of previous melanin (what happens when the skin is exposed to UVA radiation), and is thus an effective protection against radiation damage from UV- radiation, and not just cosmetic.

Tanning by exposure to UVA radiation therefore does not lead to increased protection against sun damage. To get a true "melanogenesis tan" through UV radiation, the skin must first be exposed to some direct DNA damage. This requires UVB exposure.

IS IT GENETICALLY CONDITIONED THAT SOME HAVE EASIER TO GET TANNED?

More specifically, melanin formation is a product of complex biochemical events starting from the amino acid tyrosine and its metabolite, dopa. The types and amounts of melanin produced by melanocytes are genetically determined and influenced by a number of factors, such as hormonal changes, inflammation, age and exposure to UV light. These stimuli affect the different pathways of melanogenesis (2).

IMPORTANT NUTRIENTS IN THE DIET - FOR INCREASED MELANIN PRODUCTION

To increase the melanin production in the skin, you can help the body a bit along the way to increase the amount of this protective pigment. Nutrients can be the key to increasing melanin naturally in the skin. Here are some nutrients that can help your body produce more melanin.

Copper helps the body produce melanin, as well as elastin which is another important component of the skin. Copper is needed in small amounts, and is an important nutrient for our bodies. Copper is found in oysters, liver and shellfish, among other things. Other foods that contain copper are plums, whole grains, dark leafy vegetables, potatoes and nuts.

Tyrosine is an amino acid needed for the production of melanin. Amino acids are the building blocks of protein, so you can find tyrosine in both plant and animal foods. Soy products, eggs, fish, cheese and turkey are all good sources of the amino acid tyrosine.

The rate of melanogenesis is controlled by the enzyme tyrosinase, which determines how active the cells are to form melanin (skin color depends on tyrosinase activity, not on the amount of melanin). Melanin is formed, as previously mentioned, by melanocytes in melanosomes, which are found in the skin and in the hair roots, among other things.

DO YOU LIKE THE TANNED LOOK, BUT WANT TO AVOID THE SUN?

According to studies, you can get "a tanned look" just by eating vegetables. The color that contributes to the tanned look comes from carotenoids found in vegetables.

Many carotenoids are red, orange or yellow. These are found in large quantities in vegetables such as carrots and tomatoes and to a lesser extent in fruits such as apricots and mangoes. Because these pigments are fat-soluble, some accumulate under the skin and change skin color.

Carotenoids tend to make the skin yellower. The color change from the tan, on the other hand, comes from an increase in the skin's melanin. Melanin darkens the skin and also increases the yellowness of the skin.

Sunscreens in various forms are used more and more to protect themselves against the sun's ultraviolet radiation, and are "the basics" when it comes to avoiding wrinkles and skin cancer. When the sun's rays reach the earth, it contains both UVA and UVB rays. It is mainly the UVB rays that give rise to a tanned skin, while the UVA rays, which have a longer wavelength, penetrate deeper into the skin and i.a. helps the skin to age prematurely. The sunscreens we use therefore need to protect against both UVA and UVB radiation. In 2006, the European Commission issued a recommendation to clarify the requirements for sunscreen products. One of the requirements was, among other things, that they must protect against all kinds of solar radiation, both UVA and UVB (3).

CAN YOU GET TANNED THROUGH A WINDOW?

The answer is generally no. Sunburn is caused by UV radiation that lies between the visible light and the X-rays.

The UV radiation is divided into three variants:

UVA - wavelength between 315–400 nanometers, is the least energy-rich part of UV radiation. At the same time, it is the one that has the easiest to penetrate different materials. This radiation also reaches a little further down the skin on us, and breaks down the beauty protein collagen. It is, as also mentioned above, the UVA rays that cause the pigment melanin to darken, so that we get a beautiful tan. But it is not the UVA rays, but the UVB rays that stimulate the skin to form new melanin.

UVB - wavelength between 280-315 nanometers, relatively high in energy. It is this radiation that makes us burn if we are in the sun too much. The UVB radiation is partially filtered out by the ozone layer in the atmosphere, so that only a part of the UVB radiation reaches the earth's surface.

UVC - wavelength shorter than 280 nanometers, which is extremely strong. But this does not reach down to the earth's surface because it is absorbed by the atmosphere (not just by the ozone layer, but by the whole atmosphere).

Ordinary window glass lets through most of the UVA rays, but almost no UVB rays. The melanin we already have in the skin can therefore darken, if the sun hits the skin through a window, but then the process stops.

SOME QUICK THINGS ABOUT UV RADIATION 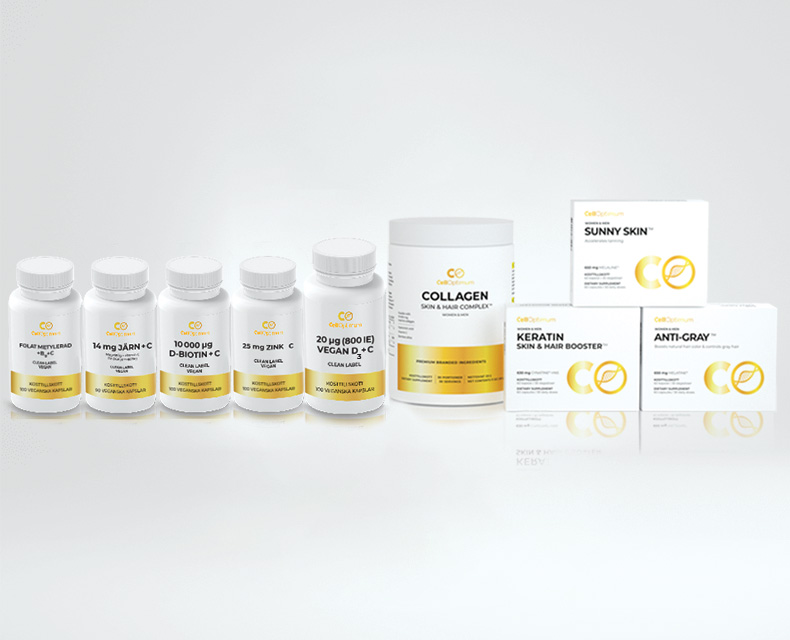 Newsletter - 10% discount on your first purchase!

Do not miss exclusive discounts, news & promotions that all our newsletter subscribers get to enjoy every month. If you sign up now, you also get a 10% discount on your first purchase!